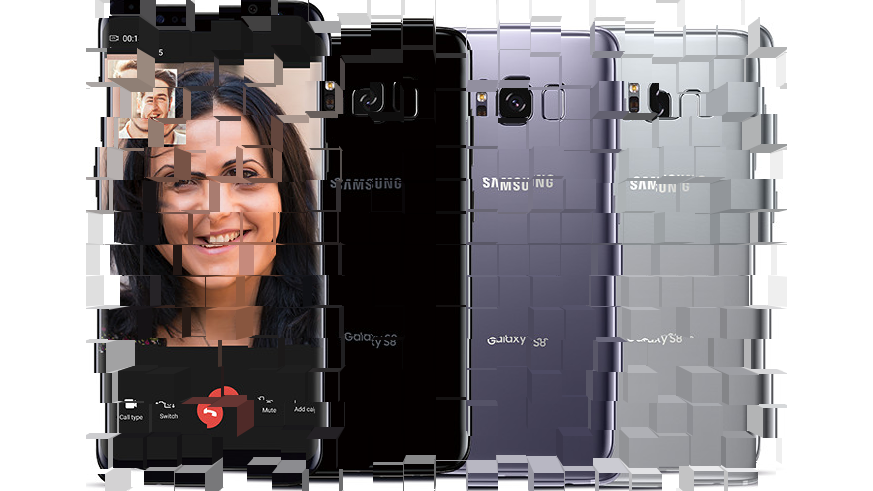 What is Device Fragmentation?

Device fragmentation refers to the wide variety of devices that are in use at any given time. This is important because websites need to ensure a good user experience on as many devices as possible. Techniques such as responsive web design have made it easier for developers to ensure that a laptop, an iPhone, and a game console running a browser all can interact successfully with a website. However, the device landscape keeps evolving. New models, new operating systems, and new browsers all add to the complexity.

How Many Device Models Are There In 2019?

ScientiaMobile’s WURFL is the most accurate and complete device detection solution on the market. As of the writing of this blog, the WURFL device detection solution tracks more than 63,000 device profiles and over time this has grown at almost 20% per year. For example, from 2018 to 2019, ScientiaMobile added more than 5,600 device profiles to WURFL.

Not all of these device profiles are in use today; many are from older feature phones or smartphones from the previous decade. Nevertheless, a good portion of these devices are still in use around the world. 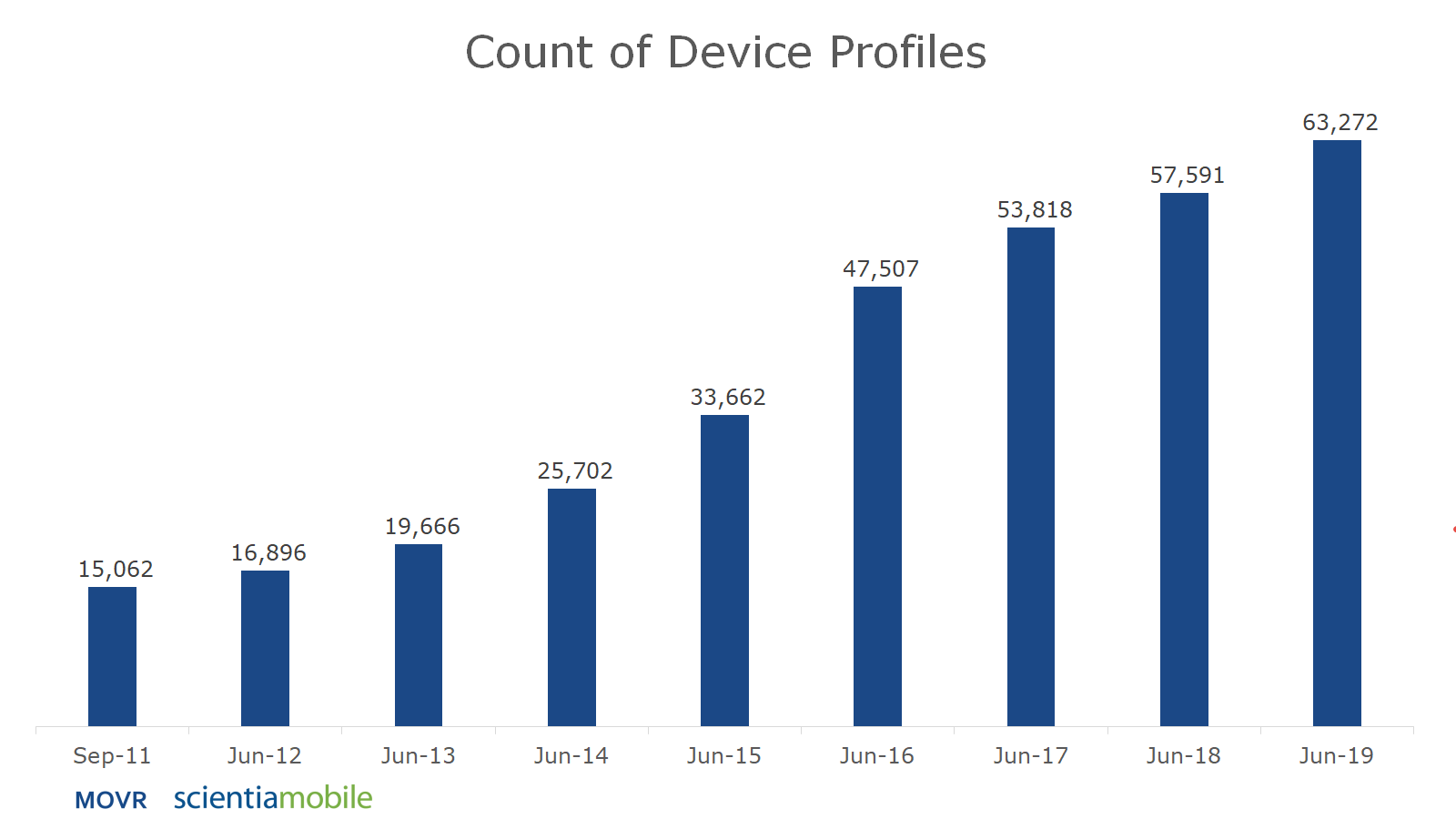 How Many Smartphones Are Used In Different Continents?

The Mobile Overview Report tracks usage from over 80,000 website domains. This generates a representative sample of usage around the globe. 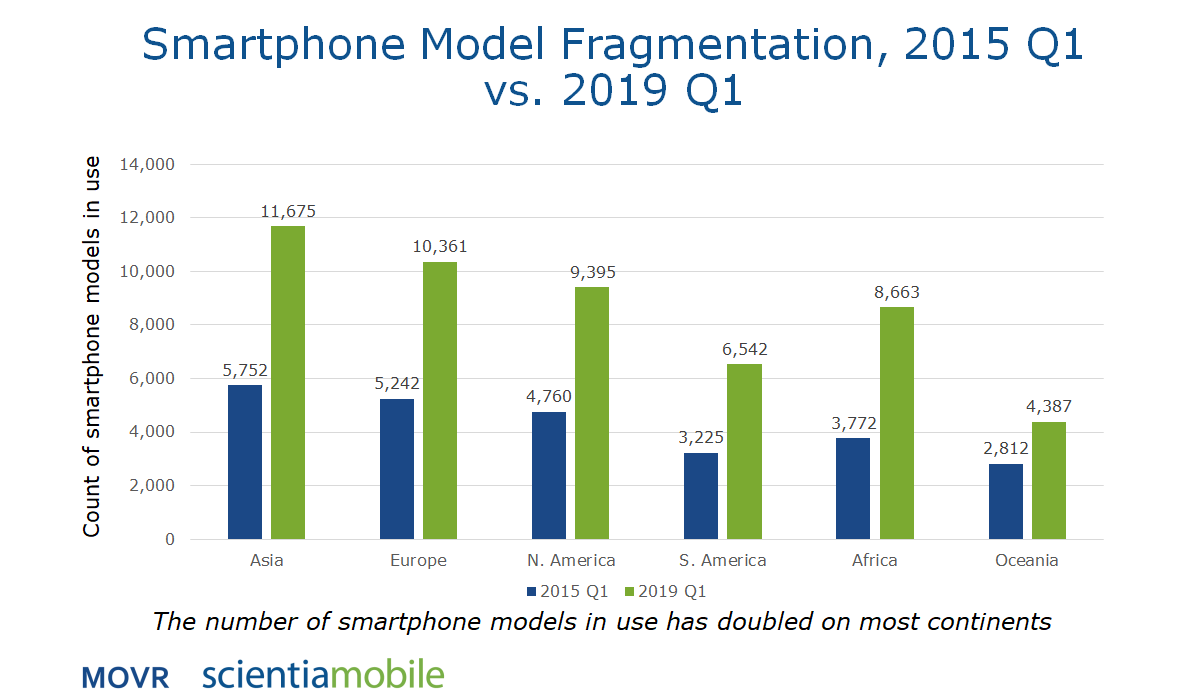 In 2019, Asia saw the highest number of different smartphone profiles, with a count of 11,675 during 2019 Q1. Most of this fragmentation is driven by the abundance of Android smartphone models produced in China.

Comparing 2015 Q1 to 2019 Q1, smartphone fragmentation has grown over 100% in Asia. While the other continents have fewer device profiles, Europe, North America, South America, and Africa have all experienced similar doubling of device profiles in use.

These trends illustrate that smartphone fragmentation continues to be a growing concern that websites and app developers need to recognize and adapt to.

How Many Tablets Are Used In Different Continents?

Tablets show different levels of fragmentation than smartphones. Europe has the highest number of different tablet models in use, with 3,176 during 2019 Q1. Apple’s iPads have dominated much of the tablet industry for the last four years. For this reason, tablet fragmentation is not as severe as in the smartphone sector. Likewise, the count of tablet models in use has grown only 18% over the last four years. 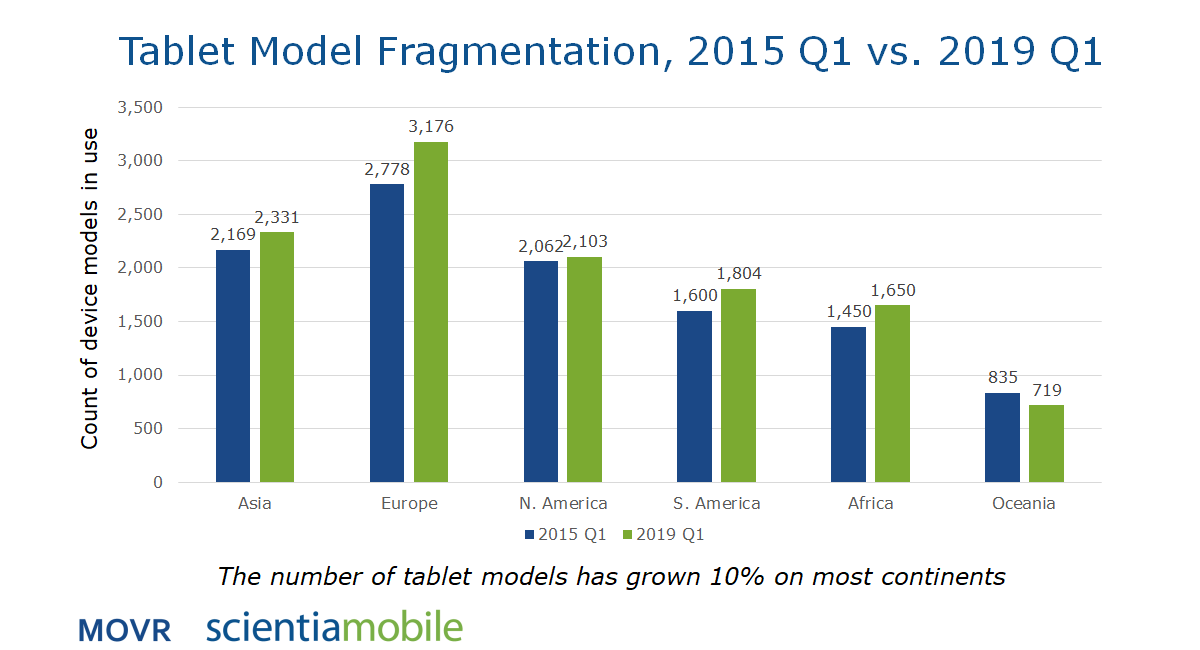 How Much Usage Is Driven By The Most Popular Phones?

Fragmentation is a real issue, but do the top 10 phones drive the most usage? If this is the case, then it simplifies development. Looking at 2019 Q1 global data, the top 21 smartphones account for only 42% of usage. Drilling down to each continent, Africa has the most unconsolidated usage, with the top 21 devices accounting for only 23%. In Oceania, where iPhones account for the majority of usage, the top 21 devices account for 64% of usage. More detail on the top device models on each continent can be found in the Mobile Overview Report (MOVR). A detailed country-level reporting is also available for purchase if desired.

How Many Devices Are Needed To Reach 95% Of Usage?

While the usage generated by the top devices is significant, it does not necessarily simplify the fragmentation situation. Most developers want to make sure their efforts ensure a good experience on 95% of devices. In a continent like Oceania, this means taking into account only 158 smartphones. However, in Africa where fragmentation is high, developers would need to consider 637 smartphones. 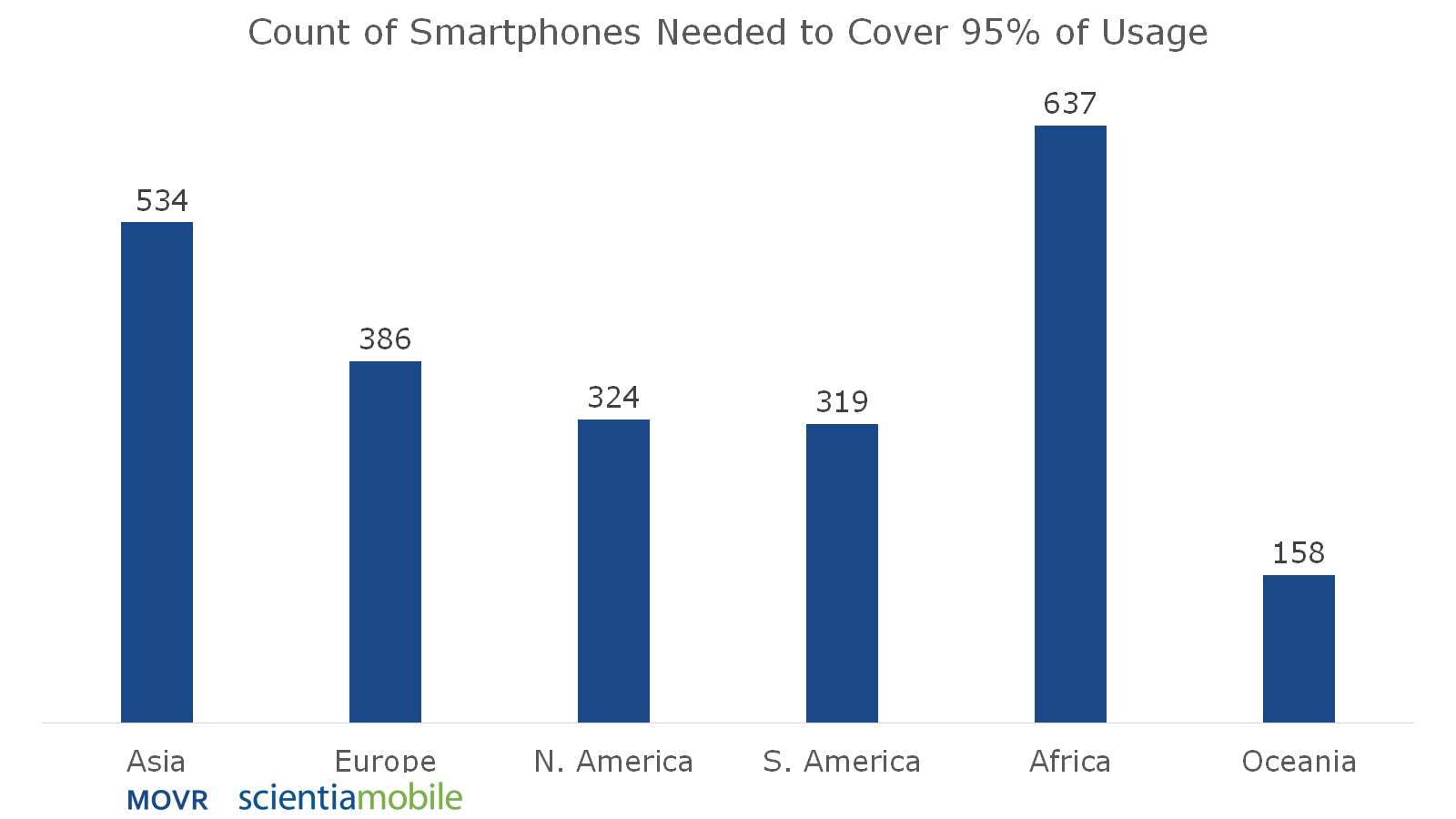 Commonly referred to as “the long tail”, smartphones on most continents have a significant long tail. The below chart shows the 95% threshold intersecting the cumulative usage curves of each continent. We have truncated the long tail here which for continents like Asia extend to more than 11,000 devices. 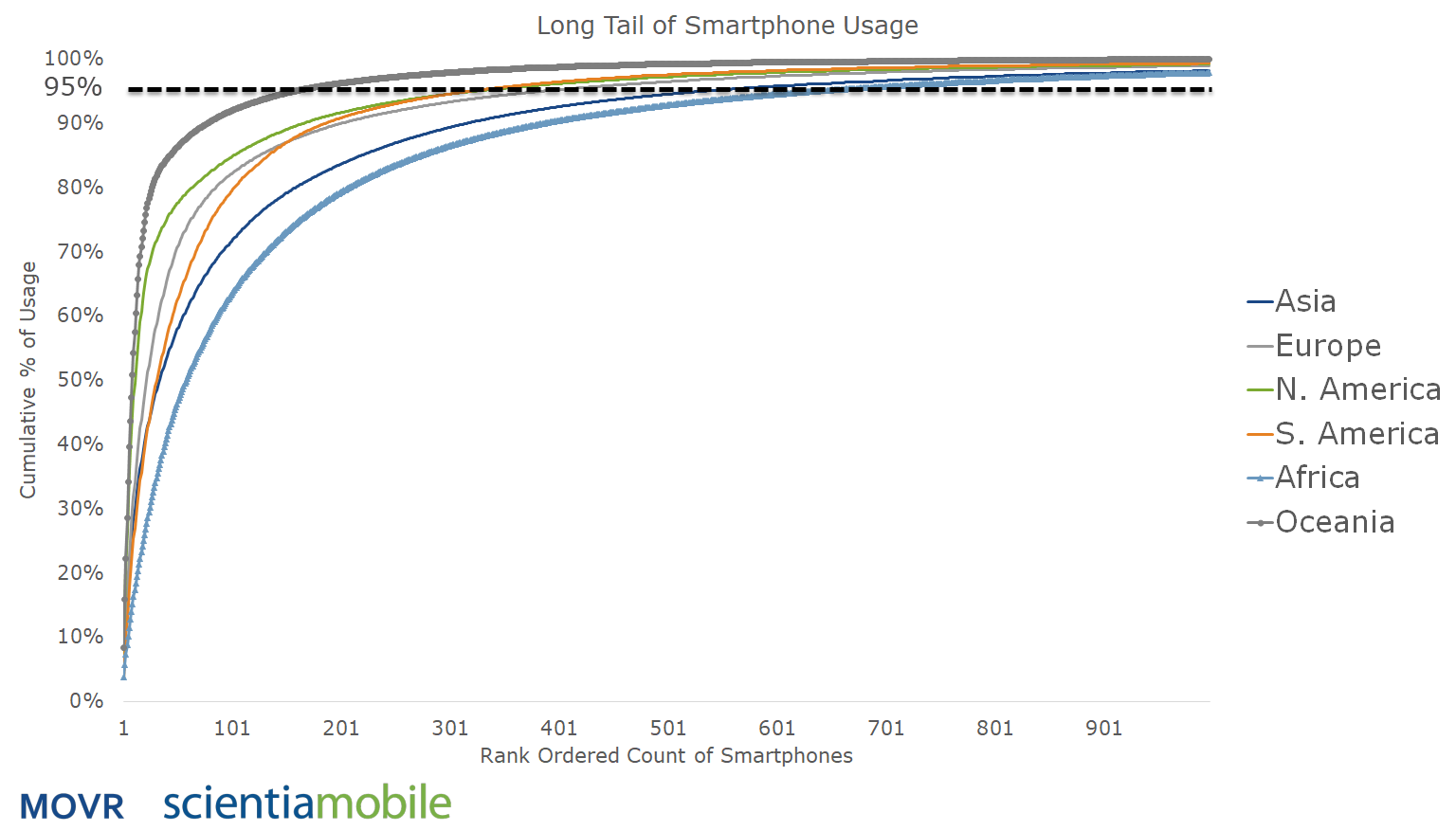 As you can see, device fragmentation is a trend that is only going to expand and is significant to most continents. Website and App developers can plan accordingly by using tools and techniques to deliver a consistent and positive user experience.