Near Field Communication Support Has Come a Long Way

Back in 2015, we reviewed the spectrum of devices, specifically smartphones, that had Near Field Communication (NFC) support. Specifically, when comparing 2015 Q4 with 2018 Q4, we saw a 19% increase in NFC support on smartphones globally.

With 54% NFC support in 2015 and 73% in 2018, we’ve seen a 19% increase in the last three years. Most of the growth was driven by Apple’s adoption of NFC in their iPhones. For more on this, we delve into growth of NFC support by operating system.

We’ve also seen a global trend of NFC support throughout the world over the last three years. In every continent, NFC support is on the majority of smartphones now, but that wasn’t always the case three years ago. For example, North America, Europe, Asia, Oceania, and Africa all had a majority (more than 50%) NFC support for smartphones in 2015, but South America did not, with 46% support. 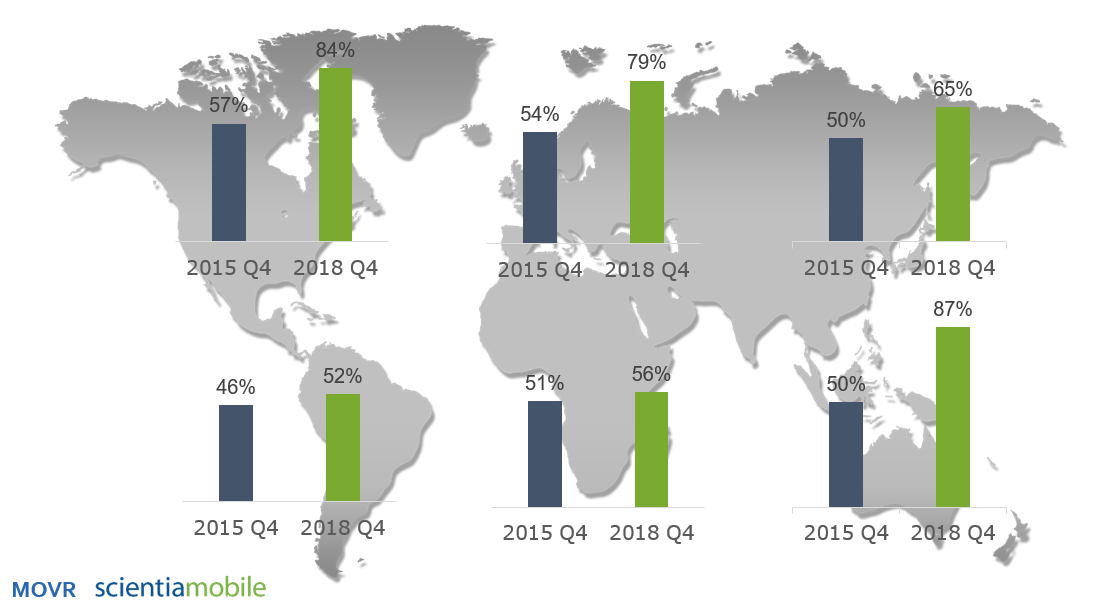 Growth for NFC support over the last three years has been the largest in Oceania (37%), North America (27%), and Europe (25%). These continents also have a large share of iPhone usage. We take a closer look at the correlation between high iPhone usage and NFC support.

In 2018, we have found that the continents with the highest amount of NFC support also have the largest amount of iPhone usage (Oceania and North America lead with over 80% NFC support).

Conversely, where iPhone usage is below 20%, NFC support is the lowest (South America and Africa have slightly more than 50% NFC support).

For more details on NFC support (such as NFC support by top smartphone manufacturers, a manufacturer comparison from 2015 to 2018, Manufacturer’s Suggested Retail Price and NFC, and price categories for NFC support in 2015 vs. 2018) please sign up to get our complete Mobile Overview Report (MOVR) emailed to your inbox.