By Andrea Castello and Luca Passani

Splunk is a data collection, aggregation and analysis software used in many different areas: application monitoring, cybersecurity and analysis of web traffic and information coming from many devices. If you are familiar with the Elastic suite of products (whose integration with WURFL we discussed previously), it is probably fair to characterize Splunk as the enterprise alternative to the ELK stack (Elasticsearch, Logstash and Kibana).

This blog post discusses the integration of WURFL device detection with Splunk and assumes that you are familiar with the Splunk product suite. As you probably know, Splunk’s ability to digest and manage large amounts of machine-generated data can be augmented with the help of Apps and Technology Add-ons (TAs). While apps are generally more complex and come with a UI part, add-ons are smaller, reusable components that Splunk uses to import, normalize and enrich data from different data sources,

This blog will demonstrate how the WURFL device detection add-on for Splunk works in a simple but concrete scenario. As usual, we need a WURFL API to extract device knowledge from user-agent strings and HTTP requests. The WURFL Microservice add-on for Splunk will enrich your data stream with device information to achieve greater insight into how users interact with your service. 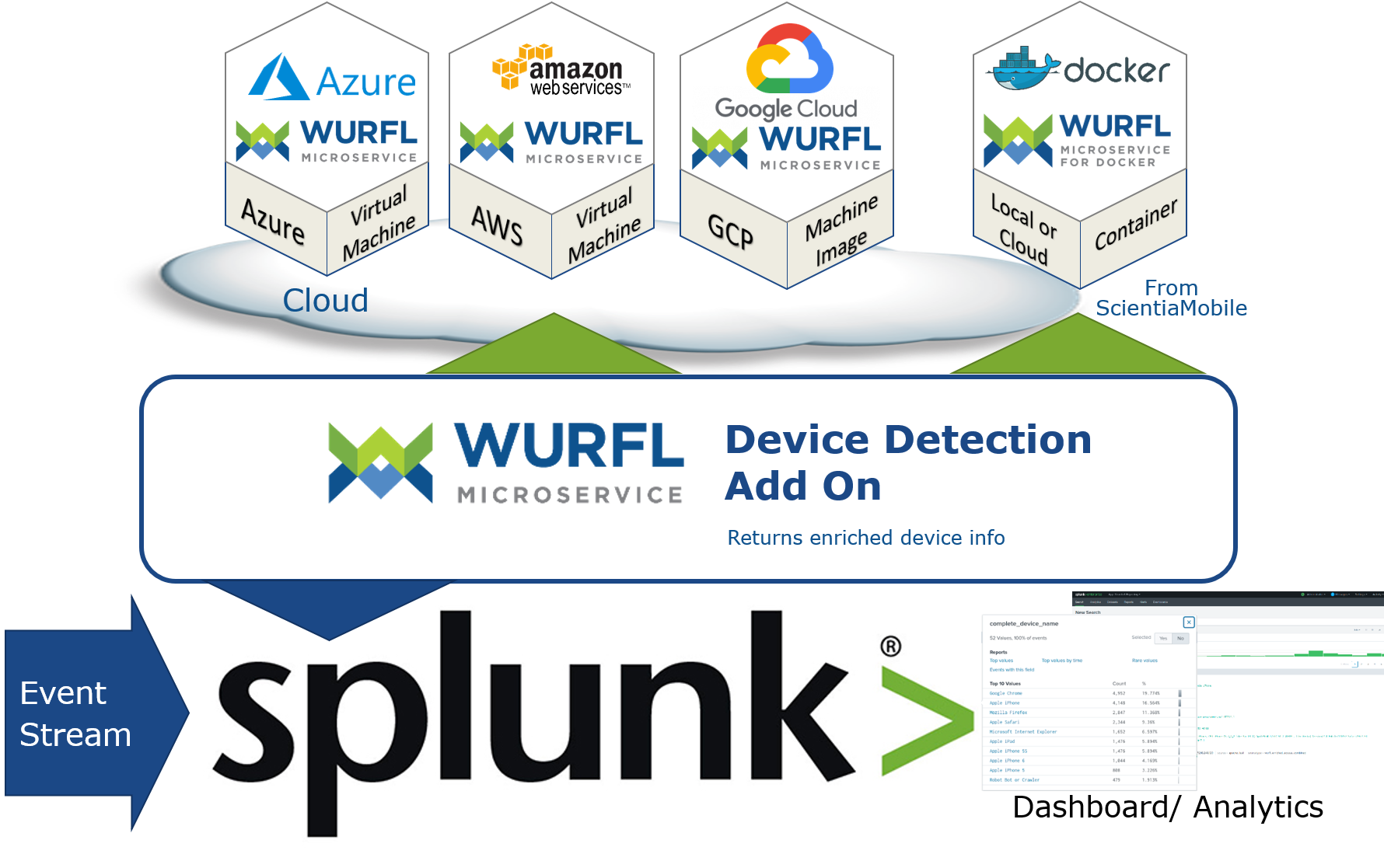 We assume that, as a Splunk user, you are familiar with indexes, events, sourcetype, and scripted input, in addition to the Python programming language.

We will illustrate two use-cases:

These two scenarios should be enough for those who know Splunk to create their own add-ons (TAs) that get their data from a DB, a TCP connection, data storage or whatever other data source.

A WURFL Microservice instance (obtainable from the AWS, Azure or the Google Cloud Platform marketplaces, or directly from ScientiaMobile in the form of a Docker image).

The code for the WURFL Microservice Splunk add-on can be found here.
To install it, simply copy the entire project directory under $SPLUNK_HOME/etc/apps

Here is the TA structure:

There are only two subdirectories, bin and default.

bin contains all of the Python scripts and their dependencies. All the needed dependencies can be downloaded using the command:

Note: if you use the pip install command without the –target option, dependencies will be installed where Splunk “cannot see them” (i.e. wherever the default system Python interpreter looks for packages). This is likely different from the Python interpreter used by Splunk internally.

The python scripts contained in bin for our two use cases mentioned above are:

For the purposes of this post, you can simply create the default directory and add your config files in there: app.conf, inputs.conf, and inputs.conf.spec

Configuration of Add-ons and Scripts

Time to dive into our use-cases. Let’s start by migrating a Splunk index containing data taken from an Apache access_combined log file to a new index that contains data from WURFL.
bin/wm_index_migration.py will:

Note: A checkpoint is a way to keep track of the number of migrated events in case of Splunk shutdown or in case more events need to be migrated in consecutive executions of the script. This checkpoint is a JSON string written on a specific index called wm_index_migration_checkpoint. (more on that later)

The search string may be set according to checkpoint values

user and password are the credentials of the internal Splunk user to access the Splunk services via its REST API.
For the sake of this example, password is base64-encoded, but you can (and should) replace the code with a more secure encoding of your choice.

wm_host and wm_port are the ones exposed by WURFL Microservice server (running on AWS/Azure/GCP or any server of your choice in case of a Docker image).

wm_cache_size is the size of WURFL Microservice client cache

capabilities is a comma separated list of WURFL device capabilities that you want to use to enrich log data.
checkpoint_row_span is the number of rows that must be read before a write operation to the checkpoint index.

index_post_deletion_sleep is the number of seconds that the scripts will wait before recreating an index that has just been deleted.

All configuration parameters are mandatory.
During initialization, Splunk will run $SPLUNK_HOME/bin/splunk start/restart.
From then on, the script runs at regular intervals according to the interval parameter as specified in inputs.conf.
Once the data is migrated, you can search the Splunk UI to view it. 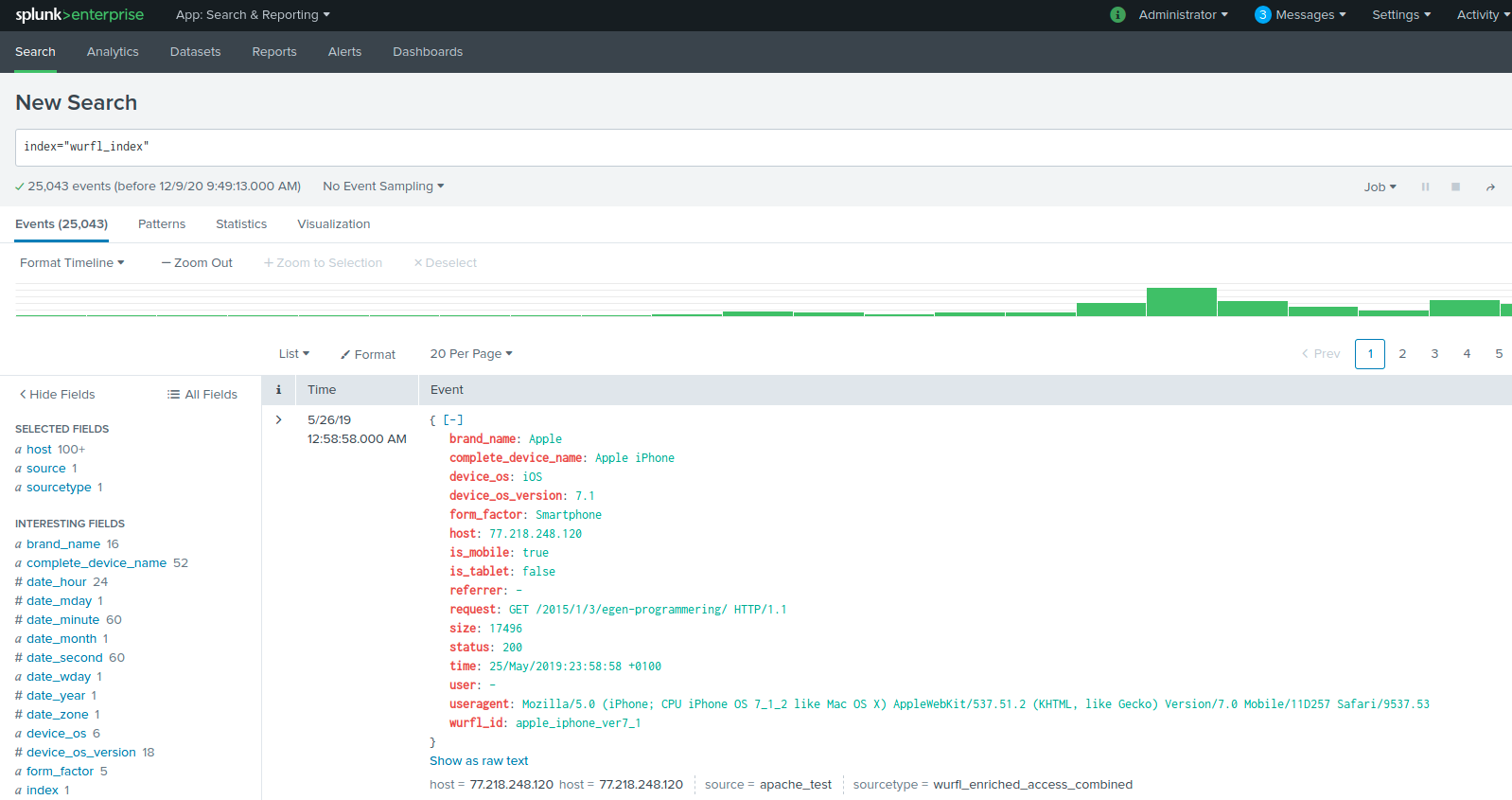 The image above shows the result of a simple search without parameters on the wurfl_index target index. The Splunk event illustrates the structure of a normal access_combined log plus various capabilities taken from WURFL (form_factor, complete_device_name). The left column shows aggregate information on the number of occurrences for each saved piece of data, including WURFL capabilities. Clicking on it will disclose more detailed stats. Let’s drill into the complete_device_name capability for example.

As far as the second use case goes, importing one or more Apache files in “forensic” format is similar in concept to the previous scenario, with only minor differences in input data, configuration and code.
The forensic log data in fact, unlike the access_combined ones, show all the headers present in HTTP requests. This allows us to obtain a more accurate device detection in certain cases (for example, side-loaded browsers, such as Opera Mini).
Here’s the configuration section of the input.conf.spec file in

Differences with the previous use case:

This Index should never be deleted unless you intend to import the data again. Writing on the checkpoint more frequently makes it possible to keep track of the progress of the import but may slow performance down.

The checkpoint management is done using the should_write_checkpoint and write_checkpoint functions. As for the detection, the WURFL Microservice client uses the lookup_headers method. HTTP headers (extracted from each log entry) are passed to the method this way:

The result of the import operation is visible in the figure that follows:

For this purpose of this blog, we have used WURFL Microservice. The rationale behind this choice is that an instance of WURFL Microservice can be obtained from the marketplaces of the major Cloud Service providers (AWS, Azure, GCP). If you have specific needs for a faster API, ScientiaMobile offers several other options in the form of APIs for all popular programming languages and modules for web servers, proxies and load balancers. A natural match for a Splunk is WURFL InFuze for Python.

We have shown how Splunk users can integrate WURFL device detection with their Splunk-based data process.
We have provided two examples that can be used to easily build a scripted input to:

If you are a Splunk user, you are probably already seeing new possibilities for analysis of your existing data which will give you greater insight.